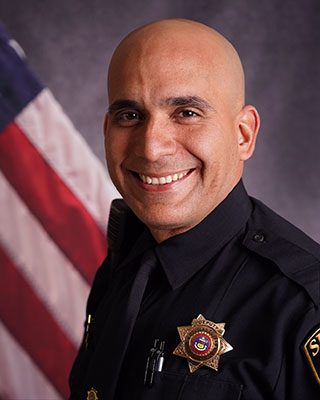 Deputy Gabe Uribe is in his third school year at STEM School Highlands Ranch, serving as the School’s Resource Officer from the Douglas County Sheriff’s Office.

I am STEM’s School Resource Officer. I want to express how excited I am to be here at STEM and to get to know you and your students. I am looking forward to this school year and to all the great things we will do together. Being part of STEM the last couple of years has been one of the greatest experiences I’ve had as a Law Enforcement Officer.

Second, I would like to share a little bit about myself with you. I do this primarily for you to know the person behind the badge.
I was born and raised in Caracas, Venezuela. I grew up with my parents and two brothers, and I’m still very close to my family even though they live far away. I graduated from high school and wanted to join the military. Because my dad used to be a diplomat for the Colombian government, I was not allowed to join the military because of conflict of interest. Instead, I pursued a degree in Communications (focusing on Journalism).

In 2005 I met my wife Leanne. She is from Chicago but was living in Caracas at the time teaching Math and Science at an International School. Leanne and I got engaged in the fall of 2005. I moved to the States July 1, 2006 and we were married a week later. In 2010 our daughter Maya was born and in 2012 our son Cody was born. Being a husband and father is one of the greatest blessings of my life.

In 2007 I began attending classes at UCCS in order to finish the degree I had started in Venezuela. In 2010 I graduated with a bachelor’s degree in Communication. That year I also became a US citizen, and it was one of the proudest days of my life. I was given opportunities in this country that unfortunately were taken away from me in Venezuela. For that, and more, I will always be thankful to this great nation.

In 2014 I decided to pursue a career in law enforcement. I attended the Police Academy with El Paso County Sheriff’s Office in Colorado. I worked there for two years and in 2016 I transferred to Douglas County Sheriff’s Office. I was assigned to the jail, and then I went to patrol. While I was on patrol, I had some friends that transferred to the Juvenile Unit as SROs. I was curious about it, so I started looking into that. I applied internally to be transferred to the Juvenile Unit, and I was accepted. Almost immediately once I was accepted in the Juvenile Unit, I was approached by my command staff and they asked me if I wanted to be the SRO at STEM. I didn’t think twice. As I mentioned above, being at STEM has been the best assignment I’ve had since I became a law enforcement officer.

I am very excited to meet all of you. I love to interact with our students and staff (and with parents too). I enjoy stopping classrooms to say hello to students and answer any questions they might have. My office is in the Middle School Office, and I want you to know that I am available for anything you need.

Thanks again for allowing me to be a part of your student’s story here at STEM. It has been a great story so far!

Favorite Starbucks Drink or Snack: Medium Roast with Some Cream