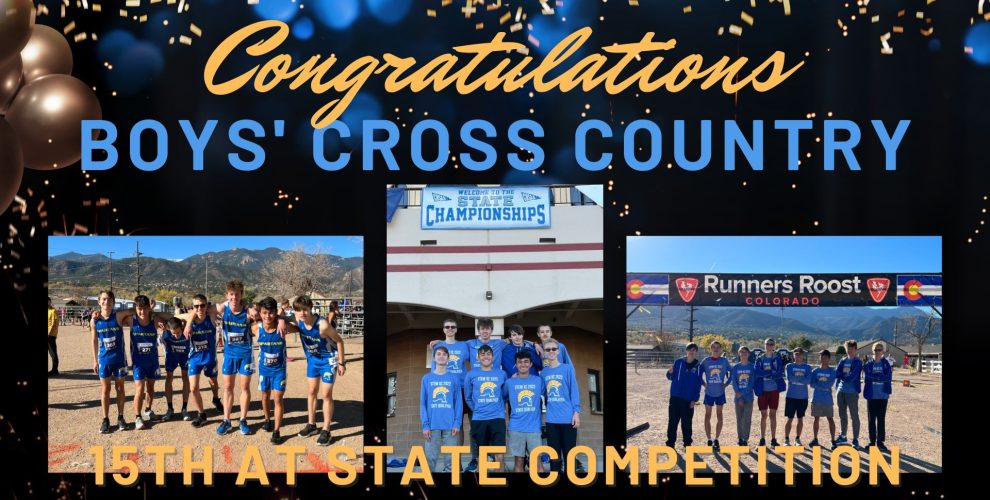 On a gorgeous Colorado fall morning, (and even with some bears on the course near mile 2.5), the Spartan boys harriers ended the 2022 cross-country season in grand fashion on Saturday, placing 15th overall as a team in the Colorado 3A State XC Championships held in Colorado Springs!

The Spartans ran a consistent race, maintaining their 15th team place at the 1-mile and 2-mile checkpoints as well as at the finish. Lucian Kasperek was again the top finisher for the Spartans, crossing the line in 37th place overall. Silas Pacheco (71st), Jacob McCallister (95th), Kylen Winslett (109th) and Westin Maymir (125th) rounded out the scoring for STEM. Nicholas Leake-Jara and Blake Huhn were the other Spartans who competed at State (the former subbing in for Cole Getting who was injured at Regionals). Despite missing a key runner, the Spartans not only improved on their #18 seed heading into the race but beat Machebeuf in the process (who had beaten STEM at the 3A Region 5 Qualifier the week before to take the #3 qualifying spot). The bottom line is that the boys competed with heart and set the bar for future STEM teams!

To have a team qualify for state competition in their very first season in CHSAA is almost unheard of, so if you see any of the harriers, please congratulate them on their accomplishments!

Thank you to all of those who have supported the boys’ and girls’ cross-country teams this season! It was an honor to coach these fine young student-athletes this season!

Time to Prepare for the 2023-24 SY; Complete Intent to Return
Comments are closed.