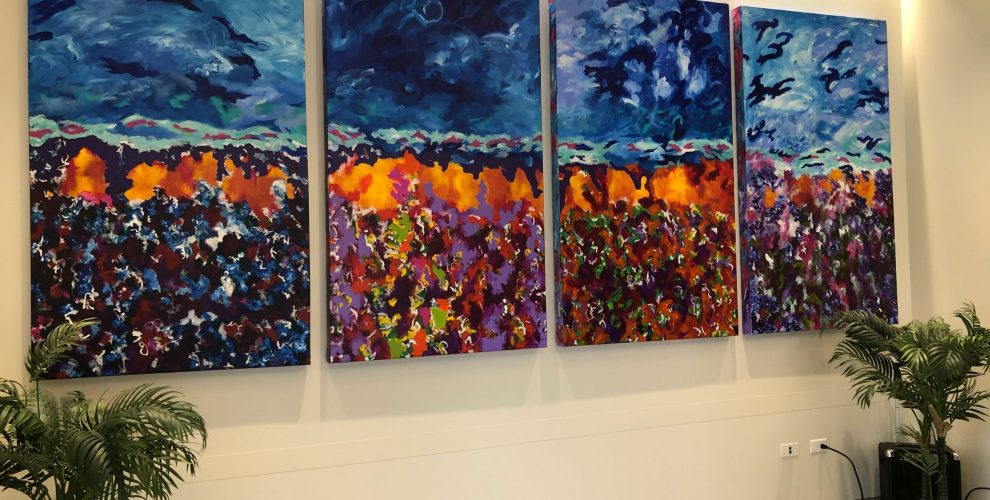 In the lobby of Northridge Rec Center in Highlands Ranch, a colorful, four-panel art display prominently hangs on the wall for visitors to see.  It is an art piece that has special meaning to STEM School Highlands Ranch senior Grace Bielefeldt and James Holmes, the local artist who painted it.  The inspiration behind the piece has to do with raising awareness for mental health, prompted by the shooting incident at STEM on May 7, 2019.  Bielefeldt, a Girl Scout, is pursuing the Gold Award, the highest award you can earn as a Girl Scout, and the art project is the impetus for that award.

“For Gold Award, it’s 100 hours of community service, and you are trying to solve a problem in a sustainable way that either has a nationwide reach or a global reach,” she said.  “And the problem I chose was mental health and my kind of solution was community art.”

Bielefeldt, who has been attending STEM for the past seven years, says her personal connection to the May 7th incident and the aftermath served as the primary motivation to do something to promote mental health awareness.

“The tragedy was definitely the spark for my project,” Bielefeldt said.  “You may have also heard, the day after the incident occurred, there was a vigil that was hosted, and it ultimately resulted in a bunch of people coming together and chanting for mental health and really trying to bring awareness to it.”

Bielefeldt says after that moment, she recognized that mental health was the challenge that really united the students, and knew there had to be something to do in order to make a difference.

The art piece is on permanent display at Northridge Rec Center.  To see the full feature of the art piece, click the video below.

Being the Beacon of Acceptance and Kindness