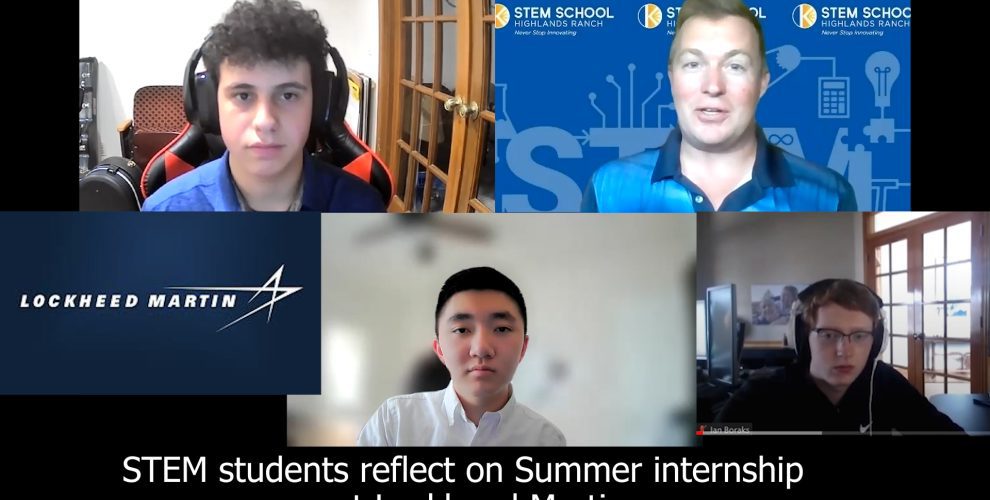 It’s not uncommon for STEM students to take on bigger challenges than expected during Summer internships, and that’s exactly what happened at Lockheed Martin.  STEM senior Ian Boraks, along with STEM juniors Aragorn Wang and Aden Betancourt spent this past Summer completing an internship at Lockheed Martin.  During that time, the group took on a big project, in developing an augmented reality app that Lockheed could use for employees and visitors at one of their main facilities.  For security reasons, Lockheed was unable to provide images or video of the app, but Wang described how it works.

“It’s a general augmented reality app that lets you view any model you like in any space really,” he said.  “The cool part about this app is it’s interactive, so you’re actually able to rotate, move, and orient the model however you would like, and see all of these changes on a peer-to-peer network on host and client iPads, similar to a Zoom call.”

It took nearly three months for the group to complete the application.  Betancourt says Lockheed gave all of them plenty of freedom to creatively develop the app the way they wanted to.

“We had the blueprints of the project, we had the idea,” said Betancourt.  “But it was all up to us and our creativity to make it and take it to the next level.  We worked with many other teams.  For example, the models we got for the app were from another internship team.   The UI buttons were from a professional UI team, but we made it all from scratch and from the ground up.”

Wang says the project wasn’t easy and came with its own set of unique challenges.

“Among the three of us, we didn’t collectively have a large amount of experience in professional software development, and we didn’t have a lot of experience in a company setting for project management,” Wang said.  “So, some of the challenges we did face with the three of us brand new to professional standardized coding was both maintaining proper documentation and following proper procedures for handling equipment, code, and really just reports to our managers and intern buddies.”

Watch the full interview about the project below.